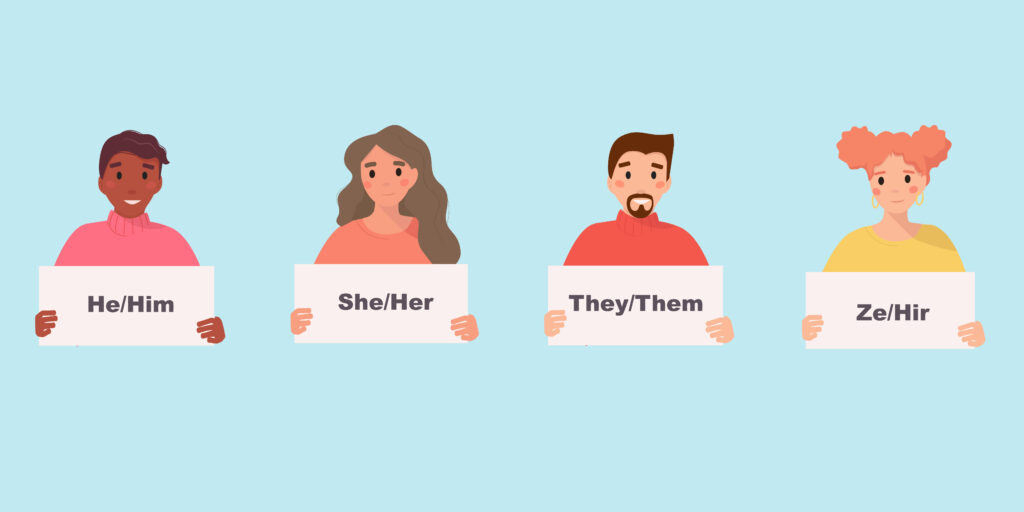 Misgendering is when you refer to someone using a pronoun or title (like Miss or Sir) that does not correctly reflect their gender identity. Misgendering can be upsetting and agitating, so here’s some tips so you don’t offend.

This article is based on a submission to TheSprout by a young person living in Cardiff.

LGBTQ+ stands for lesbian, gay, bisexual, transgender and queer history. The + is an inclusive symbol representing people of all identities within the community.

If you find words that are new to you in the following blog, like non-binary, intersex etc, then Stonewall have a fantastic Glossary of Terms explaining what each one is with the English and Welsh words listed.

The world we live in today is growing rapidly, and with this growth, people are becoming more accepting of the LGBTQ+ community. I am pansexual, which refers to my sexuality. I am also cisgender, meaning that my gender identity matches the sex that I was assigned at birth. Being part of this community, I know how important using correct pronouns and not misgendering is.

Use the correct pronouns

Ask people about their pronouns

It’s okay to ask somebody their pronouns if you aren’t sure how to refer to them. Most of my friends who are genderqueer would rather be asked what pronouns and gender they identify with rather than be misgendered.

Some people choose to change their names to reflect their gender identity. Calling someone by their birth name after they have changed their name is called deadnaming and is very disrespectful.

Use ‘they’ more often

‘They’ is a gender-neutral pronoun, so it’s safe to use this to refer to someone until you know their gender identity.

Don’t judge someone by their appearance

It’s easy to stereotype people based on the clothes and jewellery they wear. Remember that clothing and jewellery are not gendered. People can wear whatever they like, which often reflects their style rather than their gender identity. Be careful not to judge people’s gender identity based on things like hair length, wearing makeup and how deep someone’s voice is.

Apologise and correct yourself

Misgendering can be painful, so the person you misgendered may be upset. Try not to be defensive and instead, politely apologise and correct yourself by using their correct pronouns. If you aren’t sure about their pronouns, be sure to ask and try to use the correct one’s next time.