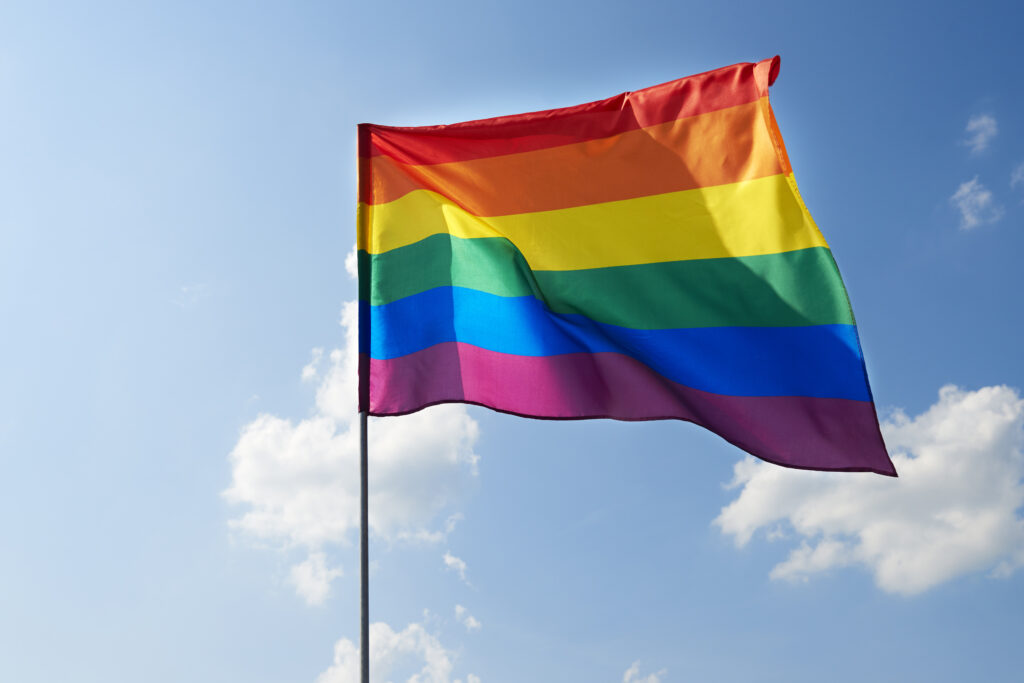 The Pride flag symbolises hope, diversity and inclusivity within the LGBTQ➕ community. Over the years, it has been updated to better represent more communities. As part of LGBTQ➕ History Month, let’s explore the history of this special flag.

LGBTQ+ stands for lesbian, gay, bisexual, transgender and queer history. The + is an inclusive symbol representing people of all identities within the community.

If you find words that are new to you in the following blog, like non-binary, intersex etc, then Stonewall have a fantastic Glossary of Terms explaining what each one is with the English and Welsh words listed.

The history of the Pride flag

During World War II, the symbol of a pink triangle was used by the Nazi’s to label men who they thought were homosexual, just as the Star of David was used to label Jewish people. Men forced to wear the pink triangles, also known as ‘die Rosa-Winkel’, were considered the “lowest of the low”.

After the war, some LGBTQ+ people reclaimed the symbol of the pink triangle. People wore it to show solidarity to those in the community who were punished for being gay.

Gilbert said that some of the inspiration for the rainbow came from Judy Garland’s song ‘Over the Rainbow’ in the Wizard of Oz movie. The song resonated with a lot of people and quickly became an anthem for the LGBTQ+ community. Judy Garland died on June 22, 1969, one week before the Stonewall riots. During this time, the community adopted the rainbow as a symbol.

The striped design on the Pride flag is thought to be inspired by the Flag of the Human Race. This was used in the 1960s to protest for world peace. It was made up of five stripes – red, white, black, brown, and yellow.

Based on this inspiration, Gilbert created the first version of the Pride flag in 1978.

The meaning of the colours

However, the pink and turquoise colours became too expensive to mass-produce, so these were dropped a year later – making the common Pride flag we see today with 6 colours.

A new interpretation of the Pride flag emerged in 2017. As the name suggests, it was created in Philadelphia, USA. This version added stripes of Black and Brown to the previous six-coloured flag to showcase the solidarity between sexuality, race and gender identity. It was created to better represent and advocate for LGBTQA+ people of colour.

A new flag called the Progress flag was created in 2018 using inspiration from the Philadelphia pride flag. Whilst the meaning behind the Philadelphia Pride flag was extremely important, non-binary graphic design Daniel Quasar thought it was hard to see all the colours on the flag with just the stripes. He decided to create a new flag design with some more additions.

The Progress flag uses the Pride flag as a base whilst adding a chevron along the left edge of the flag. The chevron includes 5 colours. Black and brown represent marginalised Black, Asian and other ethnic minority communities. Light blue, pink, and white represent transgender and non-binary individuals.

This variation of the flag aims to put marginalised communities of people of colour and transgender people at the forefront. The arrow points to the right to show movement forward but sits along the left edge to show the progress that still needs to be made.

This new flag distinguishes between using the rainbow to support the NHS during the coronavirus pandemic and representing the changing times of our community and world.

In 2021, Valentino Vecchietti from Intersex Equality Rights UK shared an updated version of the Progress Pride flag. This adds a yellow triangle and purple circle to the chevron, representing the intersex community.

Over the years, many different versions of pride flags have been created to represent the diverse sexualities and genders within the LGBTQ+ community. These include the Lesbian, Bisexual, Pansexual, Non-Binary, Asexual and Transgender flags.

These flags have been used as a way for people to share their identities with others proudly.

Whilst there have been many pride flags, none have been created to replace the original. They all add a unique and more modern outlook on the diversity of the LGBTQ+ community and changing views across the world.