Help! There’s Something Annoying on the Internet! 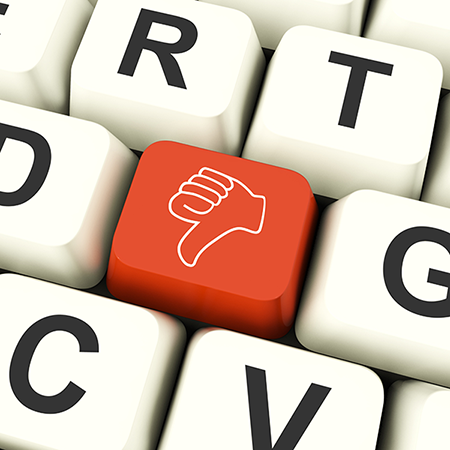 You’re online one evening, minding your own business, when pow! Something ANNOYING happens! What do you do? Read on.

Maybe it’s a post on your wall that you really don’t like. Maybe it’s a friend request from someone you don’t know, or a spammy comment saying you’ve won an iPad. You don’t like it… but you’re not sure what to do about it.

“Block it” or “Report it” are the most common tips for when you run into something dodgy online. This is great advice if you see something really bad, but what about those situations when you’re not too sure? What if it’s your friend posting jokes you find offensive, or the guy who insists on Instagramming every single bite of his lunch?

This guide should help you make an informed decision when dealing with the annoying and uncomfortable things you’ll come across on the internet. We’ll be using Facebook as our example but the lessons should apply to most online scenarios.

Safety Note: The internet can be a complicated place; if you’re unsure what to do in a situation the best thing is to talk to a family member, a trusted adult (who you know in real life) or to talk to Meic. If it’s something urgent – you think you or a friend are in real danger – you should tell someone immediately or call 999.

So when should you use these? What other options are there? Let’s establish a few things before making our decision. 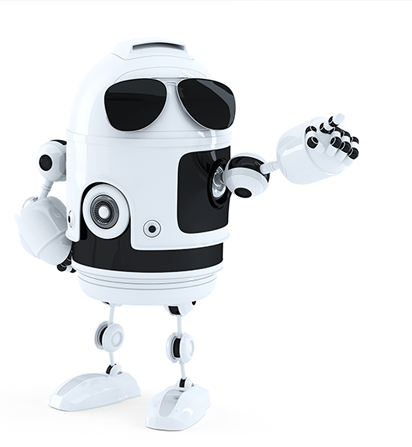 “Hello there, fellow human. You have won an iPad! Just go to www.dodgylink.com and give me your credit card details.”

Spambots aren’t human. They’re pieces of code designed to send out irritating adverts, viruses or other things you don’t want. You can’t hurt their feelings because they’re not real. If the source of the annoyance is a spambot: report as spam. This will stop you from seeing any future posts and will also tell Facebook to investigate. Congratulations: there’s now one less annoying spambot on the internet.

But what if they are human beings?

Do you know them?

You’ve established they’re human, but is it someone you know?

Meeting new people can be great, and you’re bound to make online friends, but that doesn’t mean you owe strangers anything. Chat if you like, but you don’t have to. If you get an unwanted comment from a stranger there is nothing wrong with ignoring it or (particularly if they persist) blocking them.

A bit of conversation is often all it takes to fix things.

It may well be that your friend had never stopped to consider things from your perspective, and had no idea you found their posts inappropriate or offensive. Similarly you might find that discussing the issue helps you to see it in a different light as well.

Ask for clarity if you don’t understand; educate if you see something incorrect. Do so politely and respectfully and – hopefully – they will do the same. 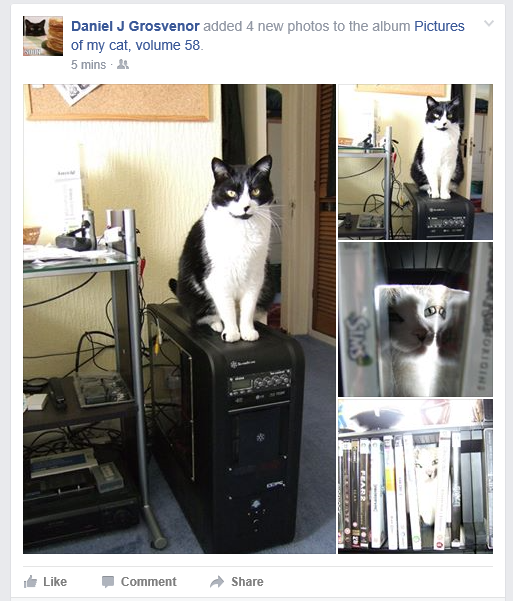 It might not change anything, but at least now he knows that what he’s posting is making me uncomfortable.

Did that make a difference? If not, let’s move onto…

You know that one friend who is constantly posting stuff that you don’t care about and clogging up your news feed? You get on with them in real life, you regard them as a friend and you wouldn’t want to exclude them but… well… online they’re just a bit too annoying?

These people are why Unfollowing was invented. Unfollowing someone means you’re still their friend, and you can still see their posts if you go on their profile, but their stuff doesn’t show up in your news feed.

There is also the option to Hide this post. This tells Facebook that, while you don’t want to ignore all of Daniel’s updates, you don’t really care about his cats and don’t want to see them so often.

Hopefully your timeline is now annoyance-free. But if someone continues to annoy you – or if you feel it’s serious enough to jump straight to these options – then let’s bring out the big guns.

Unfriending removes someone from your friends list. They will no longer be able to see most of your content*.

While they will not be notified of this, sooner or later they’re likely to notice. This could hurt their feelings and might lead to an awkward conversation the next time you see each other. You may wish to consider sending them a message first, explaining why you have decided to unfriend them.

* Unsure who can see what on your profile? On Facebook you just click on the padlock in the top-right corner. If your content can only be seen by friends then taking someone off your friends list means they can’t see it. But if something is set to Public or Friends-of-Friends then they will still be able to. 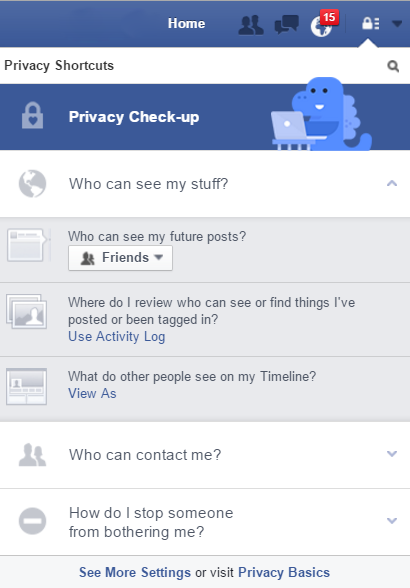 Blocking is the extreme version of unfriending. Anyone can leave comments on your Public posts (for example, replying to a comment you’ve made on a Public page). Friends-of-Friends often pop up in comments and, depending on your privacy settings, someone who isn’t your friend might still be able to message or tag you. Blocking someone removes that ability. If you Block someone then you can’t see them and they can’t see you. 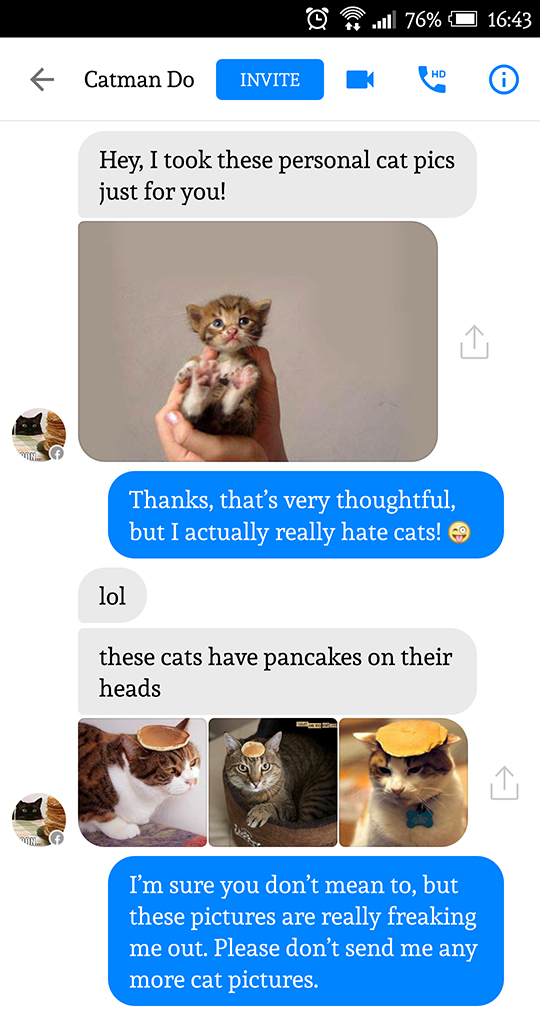 Politely and clearly explain how you feel. Using an emoticon may help to ease the tension. 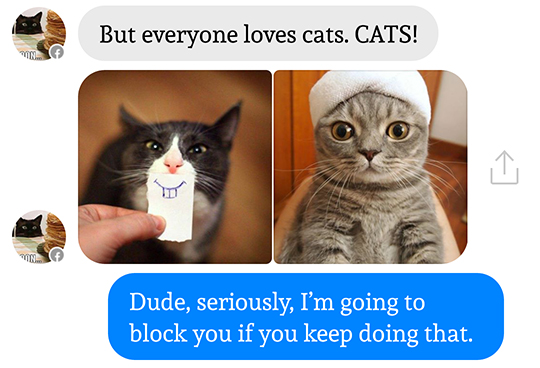 It can be hard to convey tone over the internet. Perhaps he thought you were joking? Let’s reiterate the point, more firmly this time. 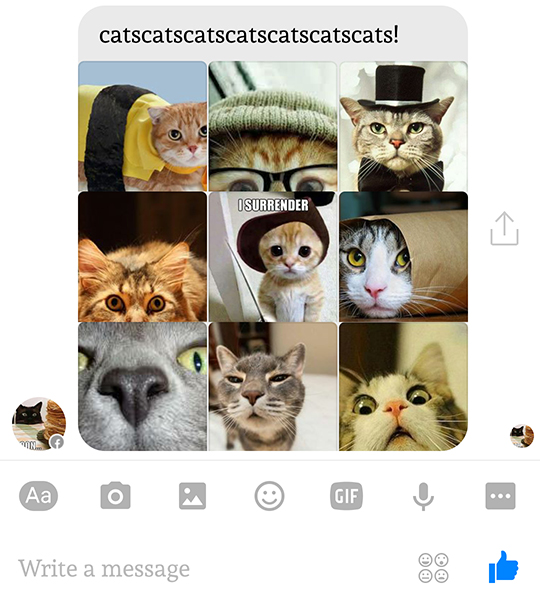 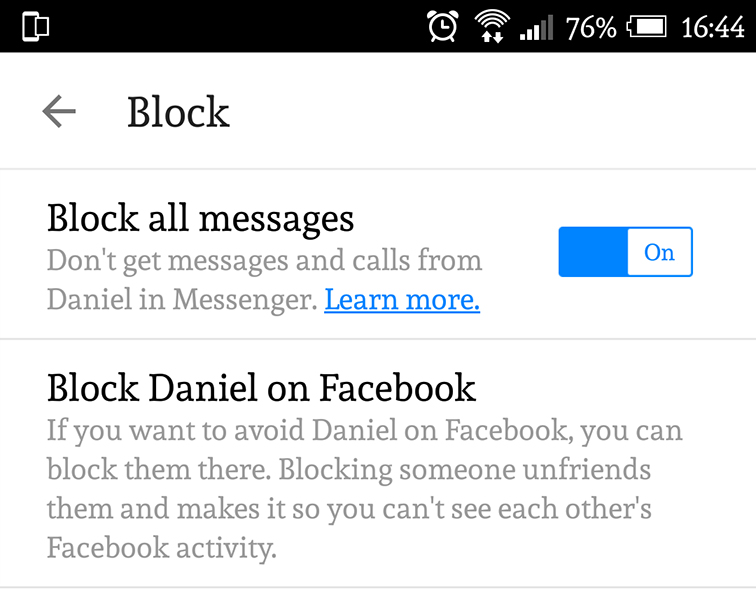 Don’t say I didn’t warn you.

I don’t just want to avoid it, I want to…

Reporting raises a flag and says “Hey, someone important: I think you should see this!” On a lot of sites it’s mostly used to report stuff that’s dangerous, hurtful or illegal. 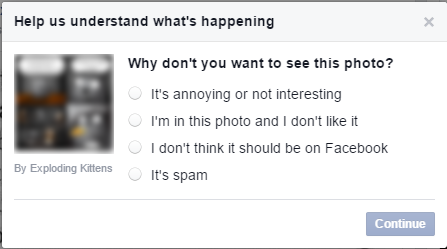 On Facebook the report function is more general: you can report serious crimes but you can also just request to have a photo removed or boring stuff hidden from your timeline. Before reporting something it’s important to read the options carefully so it gets dealt with by the right people.

How do I report something?

All social media services should have a report button (if they don’t: steer clear). Sometimes you’ll need to click on a drop-down menu in a corner:

Other times it’s nice and obvious. Occasionally with a giant eye with legs (the CEOP logo):

However you decide to keep your timelines clear of annoying or inappropriate content, make sure you’re safe, and if you’re not sure about what to do: speak to an adult or talk to Meic.

Meic is always here to talk about anything that’s worrying you. Give us a call, text or chat to us online confidentially and for free. We’re here to listen and offer advice.

What is Misinformation (Fake News)?

How To Figure Out If Something Is Fake On The Internet

Be Aware Of Your Online Safety: Tips To Keep Safe

Have You Been A Victim Of A Scam Or Fraud?

Worried About A Friend On Social Media