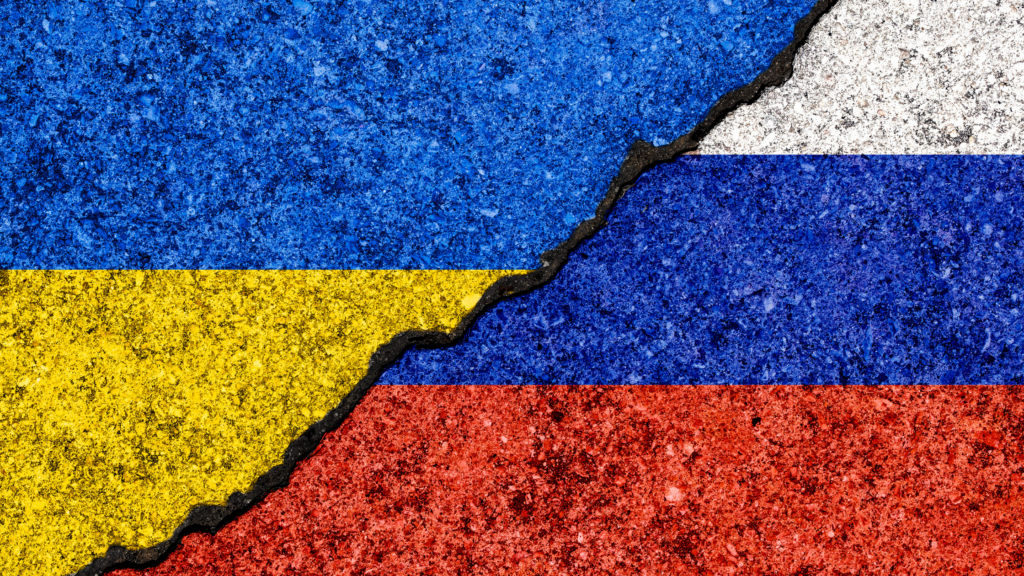 It’s hard to avoid what’s going on between Russia and Ukraine at the moment, and it’s totally understandable if it’s making you feel worried or anxious. So let us look at what’s going on together.

What exactly is happening between Russia and Ukraine?

There’s a long and complex history between the two countries which has recently escalated to war. The President of Russia, Vladimir Putin, ordered his armed forces to surround Ukraine. He told the people in Russia he had been asked by some Ukrainian regions to save them from being taken over by military extremists. This is not the truth. Like every country, Ukraine has a small number of people and groups holding extremist views, but there was no threat of extremists taking over.

Putin asked Volodymyr Zelenskyy, the President of Ukraine, to surrender some land to Russia. When Zelenskyy refused, Putin invaded Ukraine using tanks and missiles to intimidate and kill many innocent people. President Zelenskyy has asked the world to do what it can to protect Ukraine and stop Putin from taking the country by force.

What is the world doing to help?

Many countries are trying to help by telling Putin he is in the wrong. They are putting pressure on Russia by not buying or selling services or goods or reclaiming property and goods from wealthy and influential Russians outside of the country. The hope is, that as the country feels the pressure of these sanctions, it will force Putin to stop the war before more people are hurt.

Some countries are sending things like medicine, food, water and other essentials to Ukraine, as well as weapons to defend themselves. Many countries have offered shelter and support in their countries for Ukrainians that are escaping the war. As a Nation of Sanctuary, Wales aims to be somewhere that reaches out and welcomes refugees and asylum seekers. First Minister Mark Drakeford has pledged £4 million of aid to Ukraine and said, “Wales stands ready to welcome people fleeing Ukraine.”

Everybody has rights. The United Nations Convention on the Rights of the Child (UNCRC) says that children have a right to be protected during war. They also have a right to get help if they have been hurt, neglected, poorly treated or affected by war so that they can get back their health and dignity.

To find out more about the support offered to refugees and what the UK is doing to help, visit Newsround.

What do Russian people think of the war?

You’ve probably heard the terms’ fake news’ or ‘misinformation’ before. It means that widely shared information is false, or the truth is altered to make you believe the story they are presenting. Putin has blocked independent news channels and social media like Facebook and Twitter in Russia. Regular people like you and me living in Russia can only access information that the people in power want them to. This makes it very difficult for ordinary people to understand the reality of the situation and form their own opinions.

Because media is being controlled, most Russian people can’t access balanced news reports. This means they are more likely to believe Putin when he says he’s trying to help Ukraine. When people do get access to news from the outside, if they share this, then Putin will punish them. There are millions of ordinary Russian and Ukrainian people suffering due to Putin’s invasion. It is important to remember to be kind and respectful to any Russian or Ukrainian people you meet. Their nationality does not mean that they agree with Putin’s war.

How can I help?

There are many charities collecting money, clothes, shoes, books, toys or other goods to support people of all ages affected by war. You could fundraise by being sponsored to do something, organising a bake sale or a raffle. Take a look at local pages on social media to see who’s collecting for Ukraine in your area.

If you want to do something safe but more political to draw attention to what is going on, you could sign a petition, write to your MP or join an organised, peaceful march if your parents or guardian are ok with this.

How do I stop worrying?

It is natural to feel worried or anxious when you hear about distressing things happening in the world. But there are things you can do to help you cope. We have some tips in our blog How To Cope With Distressing Things in the News.

Talking about your feelings with someone else is always a good place to start when you’re worried about something. Talk to someone you trust (tips on how to start a conversation here), or if you haven’t got anyone you can talk to, then contact us here at Meic. We’re here to listen and offer advice every day.

Here For You Over Christmas and New Year

How to Start a Conversation to Share a Problem

Grab The Meic – Are People Looking At Me?